Leslieville has become popular with young professionals looking for good value in a neighbourhood close to the downtown core. While this neighbourhood has largely retained its small village character, with its cozy houses, quaint stores, and tree-lined streets, it has also been revitalized by the “Hollywood North” studio district along Eastern Avenue, where former industrial building and warehouses have been converted into lofts, film studios, and production houses!

Leslieville’s older houses were built in the late 1800’s and include Ontario Cottages, Second Empire row houses, and Victorian Houses. The second generation of houses (North of Queen Street) were built in the early 1900s and includes modest detached and semi-detached houses, as well as many small bungalows. The newest housing stock includes some condominium-lofts built in former industrial buildings.
(P) Bruce Jr. | (P) Roden Jr. | (P) Leslieville Jr. | (P) Duke of Connaught Jr. and Sr. | (PH) Riverdale Collegiate Institute | (C) St. Joseph | (C) St. William
Leslieville is well served by the public transit system which operates bus or streetcar routes on Carlaw, Jones, Greenwood, Coxwell and Eastern Avenues, as well as Queen and Gerard. Most of these bus routes link up with stations on the Bloor-Danforth subway line. Drivers can be downtown in minutes. Lakeshore Boulevard, the Gardiner Expressway and the Don Valley Parkway are all nearby. 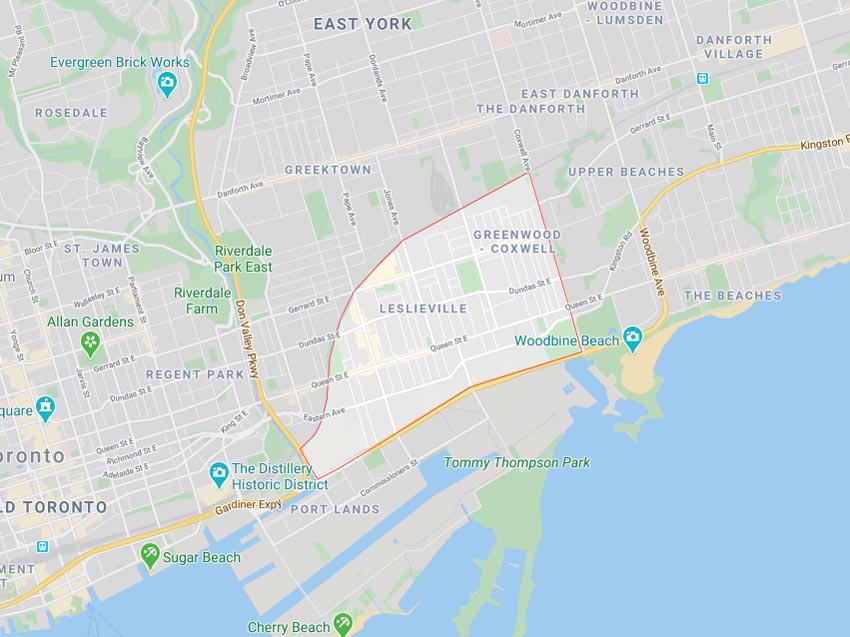