Globe & Mail: Urban loft living – with a room of one’s own 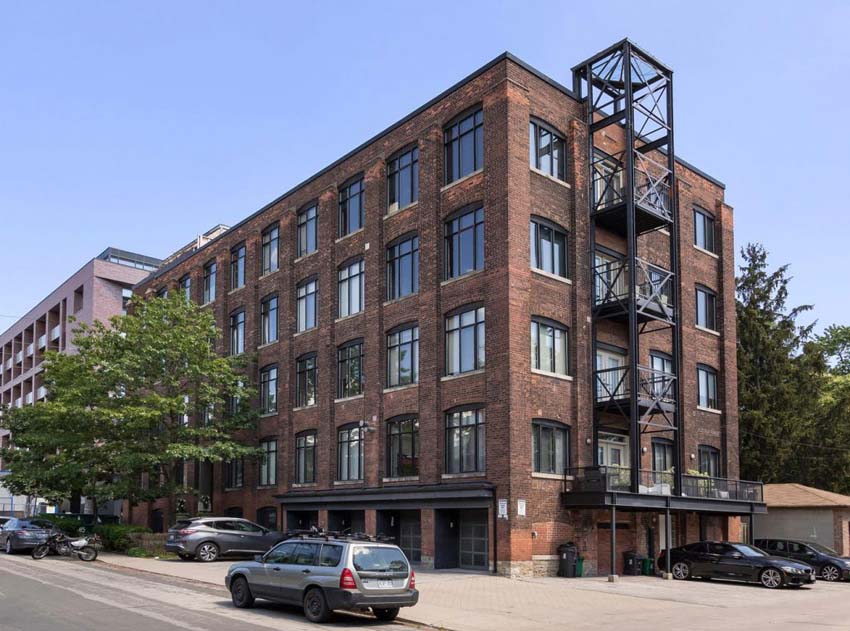 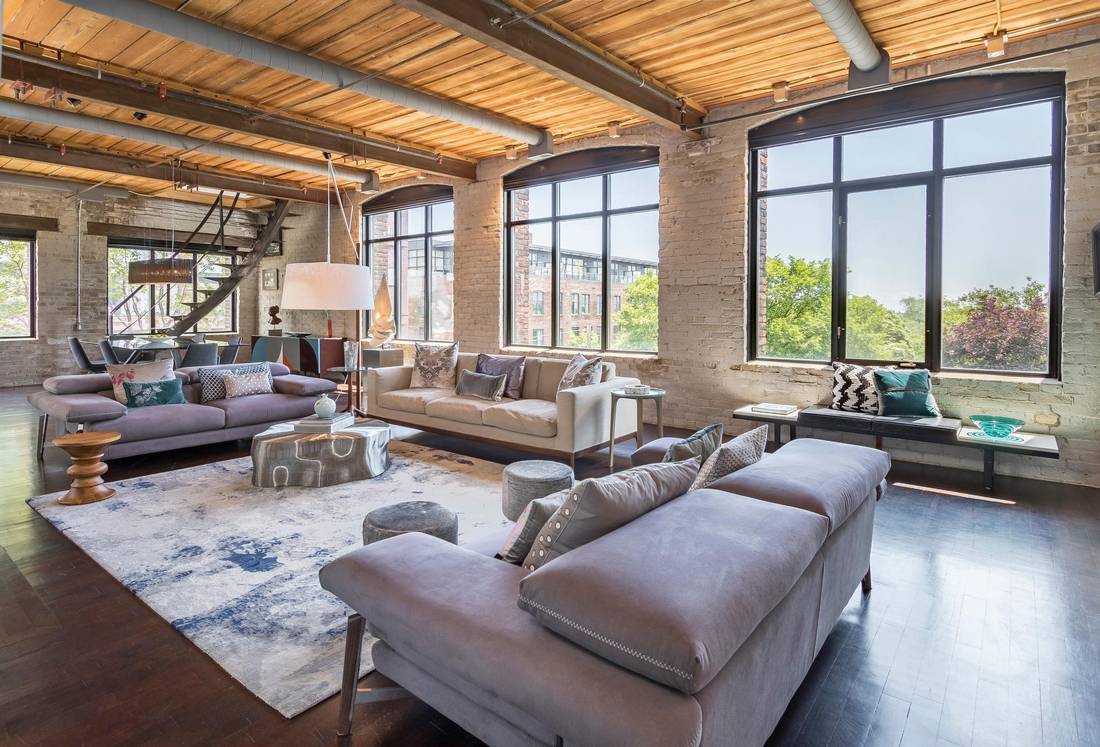 The unit has 2,000 square feet of living space. 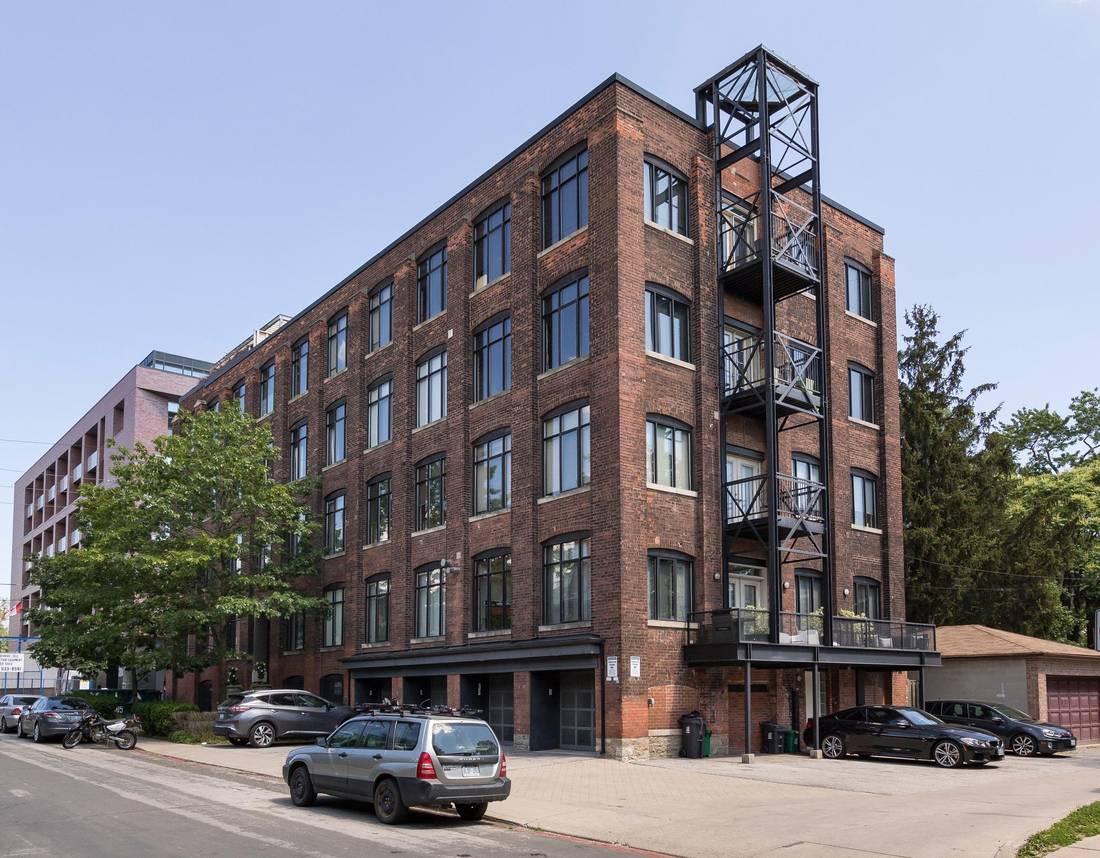 The building used to house a leather goods manufacturer.

Scott Lewis and Marilou Roth had a peek inside 1 Columbus Ave. when they visited friends who owned one of the 10 hard lofts in the converted industrial building.

The two admired the expansive windows, steel beams and rustic wood ceilings more than 10 feet high. They were drawn to the way the brick building – where a leather goods manufacturer once made sporting goods – appeared low-key from the outside but contained large and dramatic spaces inside.

The couple lived in a large house with their four children at the time, but they envisioned moving to a smaller, urban space as their kids began leaving home.

Mr. Lewis and Ms. Roth tried and failed to buy two lofts in the building. They lost out on one in a bidding war and weren’t able to reach an agreement with the owner for another. After those disappointments, their friends in the building introduced them to the owners of one of the two units on the top floor. No. 401 had 2,000 square feet of living space on the interior and half of the building’s roof for the exterior.

Mr. Lewis and Ms. Roth suggested that they would be interested in purchasing the unit should the owners ever decide to sell. In 2013, that time came and the two sides struck a deal. 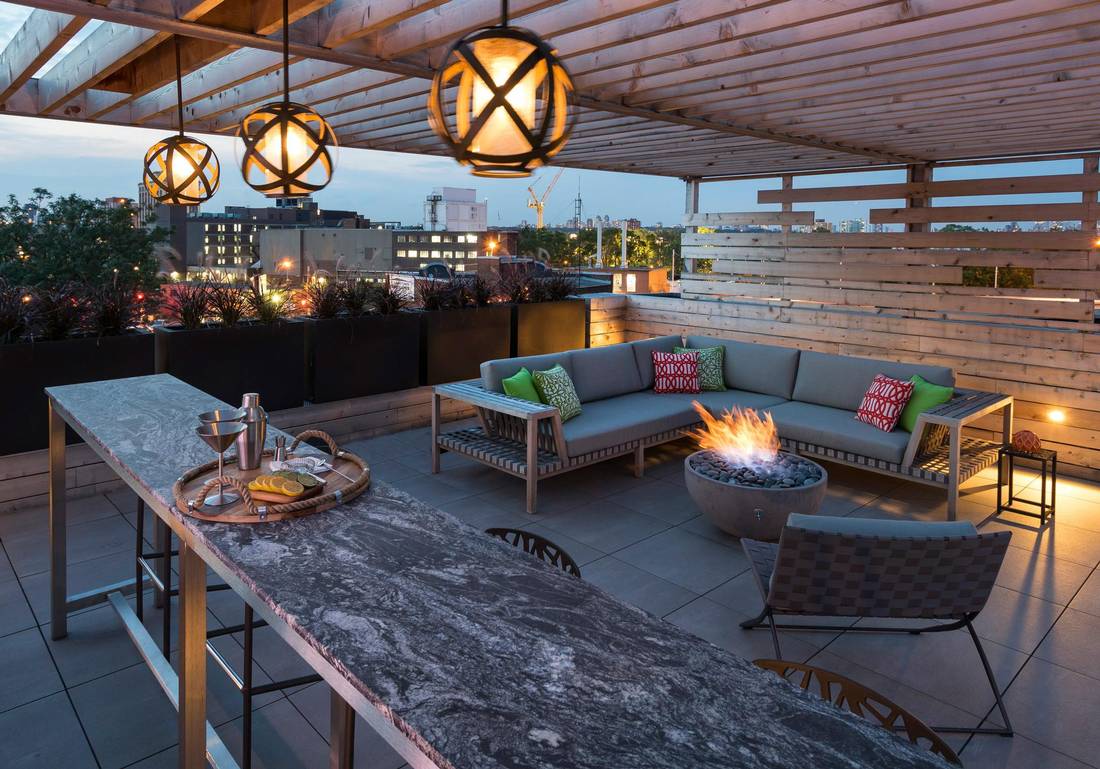 The unit comes with a 1,600-square-foot terrace that spans half the building’s roof, providing extra living space.

As they made plans to renovate the loft before moving in, Mr. Lewis and Ms. Roth thought about how to divide the loft to best suit their one son still living at home. Jack was a teenager and they wanted to give him a space of his own.

The family needed fewer bedrooms than they had in their larger house, but they still wanted room to entertain and spread out.

“It was a nice hybrid because we’ve got such spacious principal rooms,” Mr. Lewis says.

They worked with a builder and designer to reconfigure the unit into two bedroom areas with entrances at opposite ends of the loft, with the main living space in between. 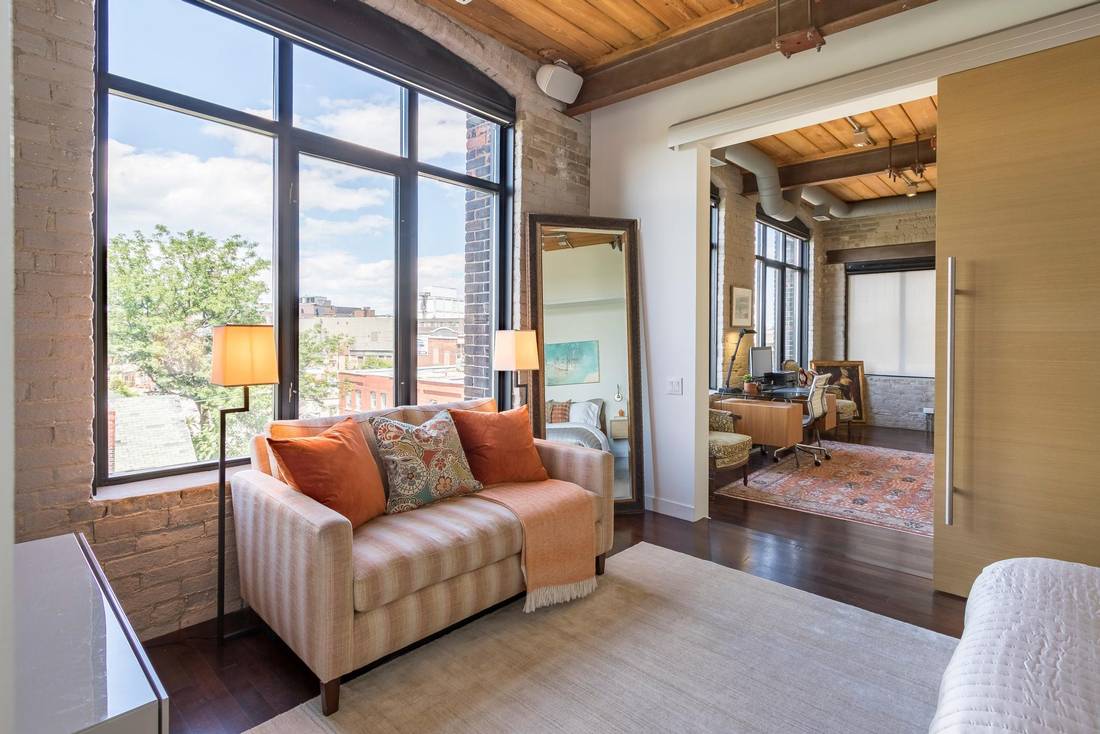 The loft’s two bedrooms are located at opposite ends, giving the couple’s son some privacy.

Ms. Roth, a retired chef and caterer, also wanted the kitchen renovated with new appliances, including a stainless steel Wolf range and a built-in steam oven.

The large, open-plan living area has two walls of windows overlooking the Roncesvalles neighbourhood. There’s a seating area around the gas fireplace, a long dining room table and an open kitchen.

Ms. Roth points out that the views extend all the way to the towers at Bay and Bloor to the east. There are some mid-rise buildings in the middle distance around the Dundas Street West and Sorauren Avenue area and, closer in, a canopy of trees. 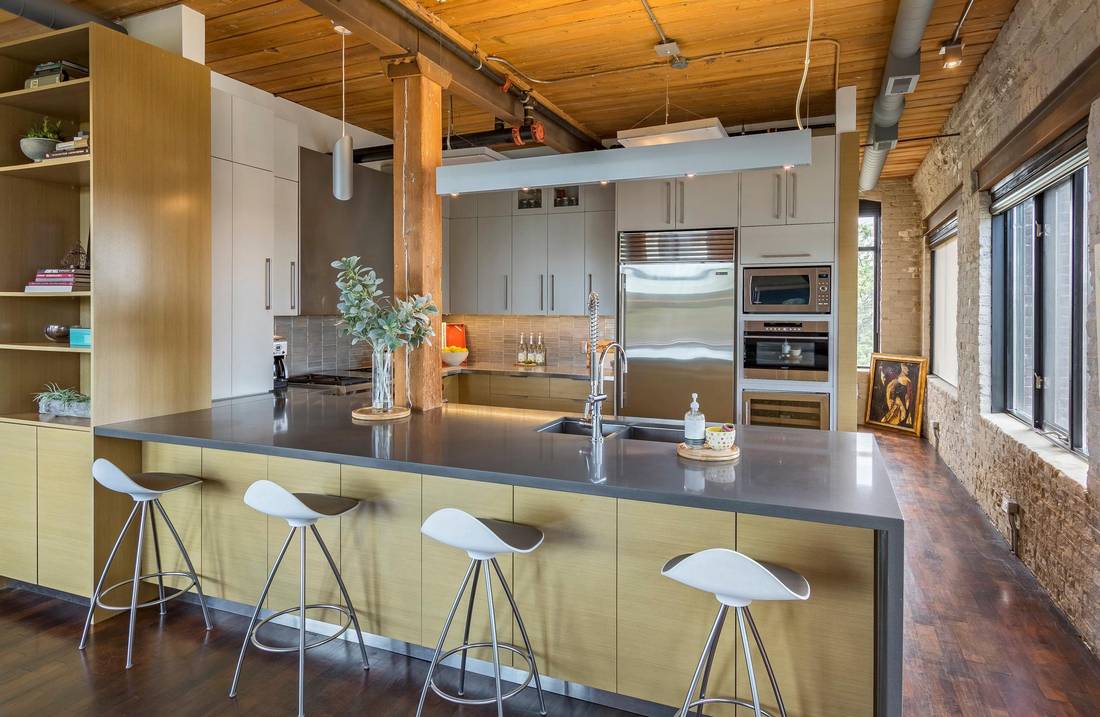 The kitchen has been renovated with new appliances.

The couple kept original features, such as the wooden ceiling, hardwood floors and exposed brick. They updated the mechanicals and replaced the light fixtures. They also extended the hardwood into areas that didn’t have wood floors. “This is a true hard loft,” says Mr. Lewis. “You have to like this kind of experience.”

The suite for a teenager or guest is tucked away behind a stainless steel door. “It’s the crypt,” Mr. Lewis jokes. “You close that and we can’t hear him and he can’t hear us.”

There’s a bathroom and a bedroom with large windows facing north.

The master suite has a large bedroom, a home office or den, and a large bathroom. The bathroom has a stand-alone tub and an enclosed glass shower. The window is strategically frosted for privacy but Ms. Roth says one of the nicest aspects of the shower is being able to see the distant views. 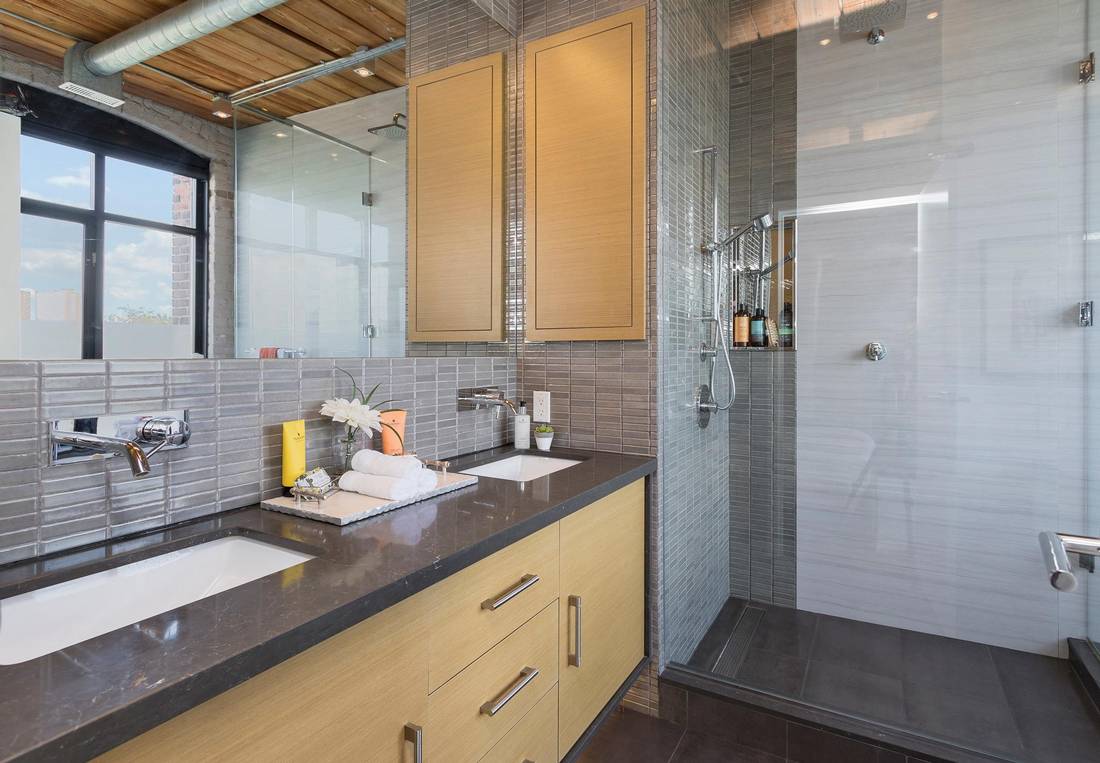 The master suite has a large bathroom, with a standalone tub and enclosed shower.

The building has no hallways; the doors of the semi-private elevator open into the suite. “It’s really quite funny how you cannot see your neighbours for weeks and weeks,” says Mr. Lewis.

The family does run into neighbours, however, when they are taking their dog to nearby Sorauren Park and smaller parkettes. They also walk to Queen Street West, Roncesvalles Avenue and Dundas Street West.

The streetcar stops a block away and the subway is about a 10-minute walk. “We’ve never had to drive Jack anywhere,” Ms. Roth says. 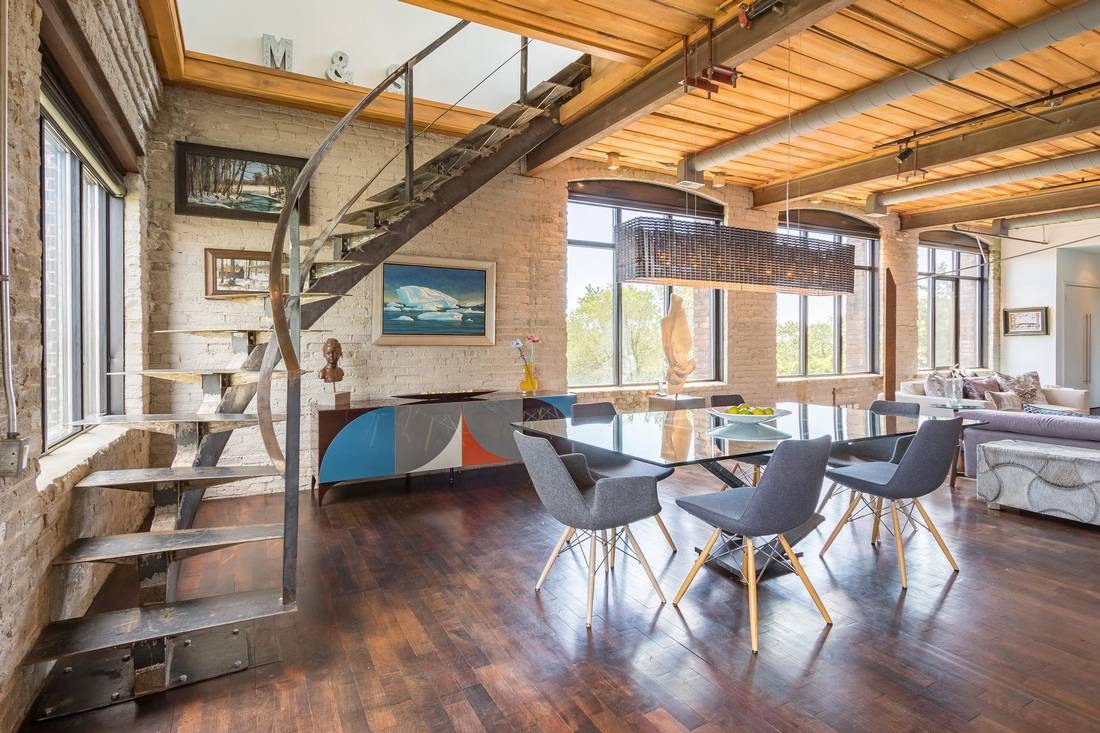 The iron staircase leads to the rooftop terrace.

A floating iron staircase winds upward to the 1,600-square-foot rooftop terrace, which has two fire pits surrounded by furniture for lounging in sun or shade or under the night sky. The views on three sides overlook the area’s streets.

A large pergola provides shade over one of the seating areas. 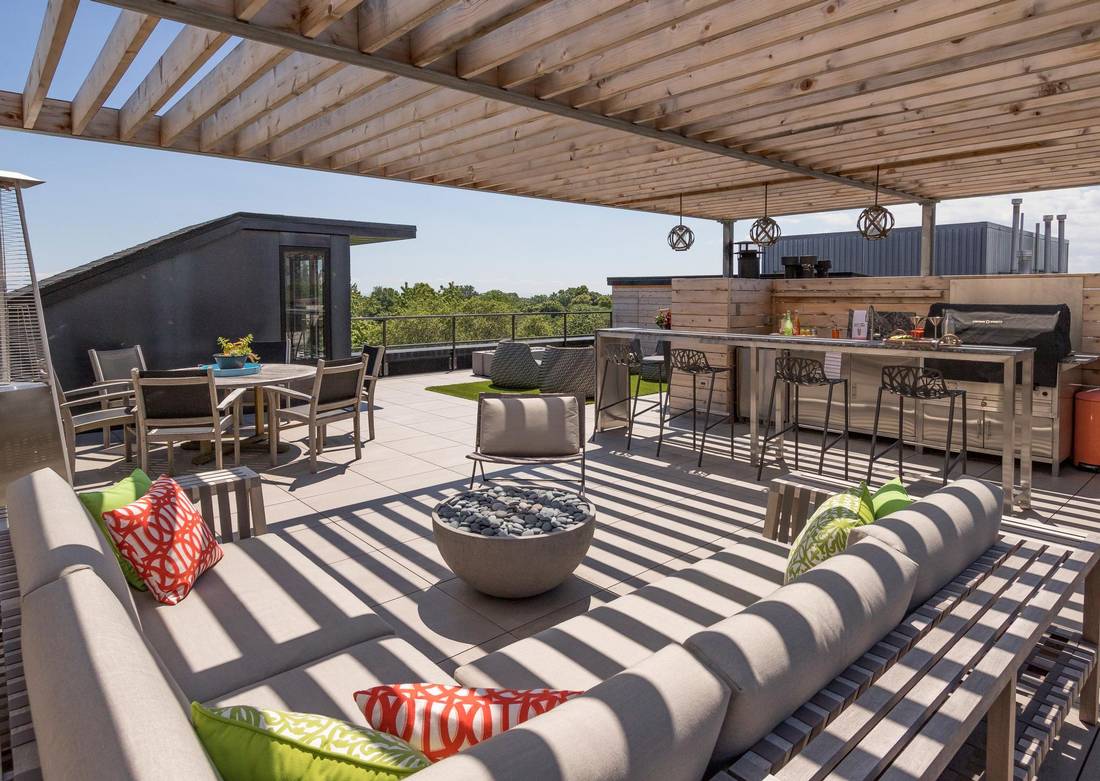 The owners have made extensive use of the rooftop terrace, grilling year-round.

Mr. Lewis and Ms. Roth have held lots of dinners and celebrations on the rooftop, including engagement parties for their kids.

They’ve used the outdoor kitchen for weekly family dinners and parties of up to 100 people.

“We grill all year round,” Mr. Lewis says.